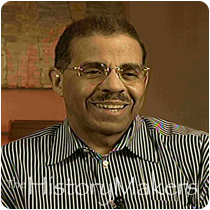 See how Frank Washington is related to other HistoryMakers

Attorney and communications industry expert Frank Washington was born on December 27, 1947, in Washington, D.C. In 1971, Washington graduated from Cornell University School of Industrial and Labor Relations. He then went on to enroll at Yale University Law School where he graduated in 1974.

In 1974, Washington was hired as a lawyer at the firm of Arnold and Porter in Washington, D.C. Preferring a more administrative role, he pursued a governmental position. In 1976, Washington joined the Carter White House where he worked on communications policy for the Domestic Policy Council, helping to develop and implement programs to foster wider minority ownership in communications companies. He oversaw cable and broadcast as the Deputy Chief of the Federal Communications Commission (FCC) Broadcast Bureau, and was also the legal assistant to the chairman of the FCC. Then, in 1981, Washington became the vice president of Time Mirror Company and was instrumental in the development of Videotex America.

During the 1980s, Washington continued working for Time Mirror in various capacities helping to develop new cable and videotext services. In 1984, he joined McClatchy Newspapers in Sacramento, California as vice president of electronic communications and used his skills to supervise the company’s cable, radio, cellular radio and electronic information services. Around this time, Washington began establishing his own business partnerships. From 1989 to 1995, he served as general partner in cable television limited partnerships located throughout the United States, with a combined subscriber base of nearly one half million. In 1995, Washington attempted unsuccessfully to buy Viacom, Inc. In 1996, he became CEO and president of the Sacramento-based computer technology solutions provider, System Integrators, Inc. In addition, Washington was a founder, investor and principal in Aurora Communications, a broadcast radio company.

Washington was the chairman and CEO of Tower of Babel LLC from 2004 to 2008, and has controlling interests in two other broadcast television operations. He serves on the boards of numerous companies including: World Television of Washington LLC, Spartan LLC, and Quantum Communications LLC. Washington also serves as the director of several non-profit organizations including: the Board of Visitors of UC Davis School of Medicine; UC Davis Medical School’s Center for Health and Technology; and the California Chamber of Commerce board.

See how Frank Washington is related to other HistoryMakers
Click Here To Explore The Archive Today!