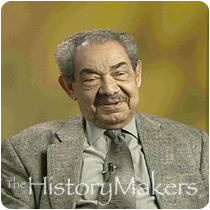 See how Frank Toland, Sr. is related to other HistoryMakers

In 1949, Toland left William Penn Business Institute and began working in the history department at the Tuskegee Institute (later Tuskegee University). It was at the Tuskegee Institute that he met his future wife, Maree N. Morse, who was a Tuskegee Institute graduate, and got acquainted with the late Booker T. Washington. The couple married on August 16, 1950, and later had three children. In 1968, Toland became the chair of the Department of History, a position he held until 1984. Also in 1968, Toland was elected unanimously as a member of the City Council of Tuskegee. Toland went on to become the head of the membership committee, the Chairman of the Political Education Committee, and one of the vice presidents of the Tuskegee Civic Association. Driven by a passion to change the racial inequality that existed in Alabama, Toland became involved in the NAACP and the Macon County Democratic Club and used his membership on the various committees as a platform to voice his opinions on race relations, especially in regards to the Voters Rights Act. Through his involvement with civil rights issues, Toland met numerous leading activists including Dr. Martin Luther King, Jr. and Reverend Ralph Abernathy.

See how Frank Toland, Sr. is related to other HistoryMakers
Click Here To Explore The Archive Today!