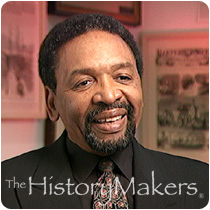 Commentator, civil rights activist, politician, and speaker Frank Smith, Jr. was born on September 17, 1942, in Newnan, Georgia. His mother was a homemaker and his father was a farmer and truck driver. In 1959, Smith earned his high school diploma from Central High School, where he was a member of the New Farmers of America as well as the debate team, choir and drama club.

From 1959 until 1962, Smith attended Morehouse College in Atlanta, where he was a founding member of the Student Non-Violent Coordinating Committee (SNCC). Smith left Morehouse during his senior year to play a role in the Civil Rights Movement. From 1962 until 1968, Smith worked with SNCC organizing and registering African Americans voters in Mississippi and Alabama. He is noted for his involvement and leadership role in planning and executing protests and marches in Greenwood, Mississippi, during the Freedom Summer of 1964.

In 1968, Smith moved to Washington, D.C., when he accepted a job as a researcher for the Institute for Policy Studies, focusing on education and planning issues. Smith became involved in local community issues and was elected to serve as an Advisory Neighborhood Commissioner (ANC). In 1978, Smith unsuccessfully ran for the District of Columbia City Council, but the following year he was elected to public office and served one term on the D.C. Board of Education. In 1980, Smith earned his Ph.D. degree from the Union Institute in Ohio.

In 1982, Smith was elected to the District of Columbia City Council where he represented one of the most racially, ethnically and economically diverse wards in the city. Smith was subsequently elected to serve four terms on the Council, remaining there until 1998. During his tenure on the Council, Smith supported legislation creating subsidies for housing down payments, a lottery system for disposing of condemned and surplus housing and establishing tax incentives for new business development.

In 1998, Smith became chairman of the board and chief executive officer for the organization which worked to establish the African American Civil War Memorial and an accompanying museum. It is the only national memorial to the colored troops who fought in the Civil War and one of the most unique memorials in Washington, D.C.

Smith has received numerous awards for his civic, community and political leadership.