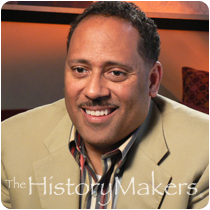 See how Frank Ski is related to other HistoryMakers
Donate Now

Radio personality Frank Ski was born Frank Rodriguez on May 9, 1964, to Sandra Brent and John Rodriguez in New York City. At an early age, Ski was placed into foster care by his mother. Then, at the age of six, the court ordered that he remain under the custody of his father in Miami, Florida. As an adolescent, Ski spent summers in New York City where he witnessed the birth of hip hop culture. He later became influenced by the hip hop lifestyle to become a local disk jockey.

After graduating from high school, Ski moved to Baltimore, Maryland, and attended the University of District of Columbia to pursue a career in law. It was there that Ski started his career in radio broadcasting as a part-time disc jockey. During his college years, Ski also worked as a paralegal. Then, in 1985, Ski was offered a position as an evening shift disc jockey with V-103 (then-called WEBB). He worked in that capacity for almost ten years and eventually became the co-host for the number one rated morning show, The Frank and Jean Morning Show.

In the early 1990s, Ski began remixing songs for Luke Skyywalker Records. He won the attention of music critics with his mix of the song, “Doo Doo Brown,” in 1991, and in 1994, he made his acting debut by appearing in the film, Detention. Ski would later go on to appear in several other full-length feature films. In 1996, Ski joined 92Q FM in Baltimore, Maryland, and in 1998, he was hired by the Atlanta radio station, WVEE, as its morning show host alongside comedian Wanda Smith.

Ski went on to found the Frank Ski Kids Foundation in 2000. The foundation provides assistance to low income youth applicants and youth-serving agencies to expand opportunities for educational, athletic and cultural learning. Later, in 2004, Ski became the spokesperson for the Civil Rights Walk of Fame and raised $500,000 for the Hosea Williams Feed the Hungry and Homeless and Metro Atlanta Respite & Development Services.

In 2002, Rev. Jesse Louis Jackson, Sr., presented Ski with the Journalist of the Year Award from the Rainbow Push Coalition, and in 2007, Ski was honored with the Distinguished Community Service Award from the Atlanta Chapter of the National Urban League. He is a member of 100 Black Men of Atlanta, the Latin American Association, Rainbow Push Coalition and Leadership Atlanta.

Ski lives in Atlanta with his wife, Tanya, and their sons.

See how Frank Ski is related to other HistoryMakers
Donate Now
Click Here To Explore The Archive Today!