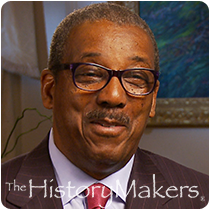 See how Frank Savage is related to other HistoryMakers
Donate Now

Investment banker Frank Savage was born on July 10, 1938 in Rocky Mount, North Carolina to Grace Savage and Frank Savage, Sr. When Savage was six months old, his mother and his twin sister, Frances, moved to Washington, D.C., where Savage’s mother opened up a beauty salon. In 1961, Savage earned his B.A. degree from Howard University, and in 1964, he received his M.A. degree in international relations from Johns Hopkins University.

Savage is chairman emeritus of the SAIS advisory board and of Howard University’s board of trustees. He has also served on the boards of Bloomberg LP, New York Academy of Medicine, Lockheed Martin, Qualcomm, and the New York Philharmonic. He was awarded an Honorary Doctorate in Humane Letters from Hofstra University and an Honorary Doctorate of Humanities from Howard University. In addition, Savage won the Lord Nelson Trophy as part of the 2003 Antigua Race Week Regatta, the premier sailing event in the Caribbean.

Savage is married to Lolita Valderrama Savage. They have six children.

Frank Savage was interviewed The HistoryMakers on May 5, 2014.

See how Frank Savage is related to other HistoryMakers
Donate Now