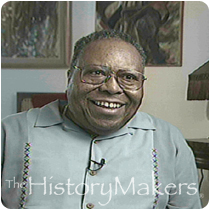 See how Frank Morris is related to other HistoryMakers

Educator Frank Morris, Sr., was born in Cairo, Illinois on July 21, 1931. At age six, he moved to Boston, where his grandparents and his aunt and uncle raised him. An honor student in high school, Morris was awarded a scholarship to attend Colgate University. From there, he attended Syracuse University, earning his M.P.A. degree. Morris later went on to earn a Ph.D. in political science from MIT and he later completed the requirements for his master’s in international affairs from Georgetown University.

After graduating from Syracuse University in 1962, Morris joined the U.S. Department of Housing and Urban Development, working out of the Seattle office. He joined the U.S. State Department in 1966, and by 1969, he was the deputy regional coordinator for the Latin America Office of Program and Policy Coordination. In 1972, Morris moved to Chicago, where he became an associate professor of political science at Northwestern University. After working with the National Education Institute and the Community Services Administration, Morris joined the U.S. Foreign Aid Program to Jamaica, where he retired as deputy director in 1983. Returning from Jamaica, Morris became the executive director of the Congressional Black Caucus Foundation. In 1986, Morris was named the associate dean of the Graduate School of Public Affairs at the University of Maryland, College Park. In 1988, he left for Morgan State University, where he retired as the dean of graduate studies and research in 1996. After moving to Texas in 1997 to be closer to his grandchildren, Morris became a visiting professor in government and politics at the University of Texas, where he remained until he retired in 1999.

Throughout his distinguished career, Morris was highly influential in all the positions he held. While working with the State Department in Jamaica, he oversaw the growth of U.S. federal aid to the country to become one of the three highest per capita U.S. AID programs in the world. While serving as dean at Morgan State, he formed a partnership with the Hokkaido Foundation of Japan and instituted a program to teach Japanese. He has also served as a consultant to organizations in the U.S. on issues relating to Africa and Europe.

Morris has received numerous awards over the years, including having been named “Father of the Year,” by the Chicago Defender and recipient of the Superior Honor Award by the Department of State. He and his wife have four children.

See how Frank Morris is related to other HistoryMakers
Click Here To Explore The Archive Today!