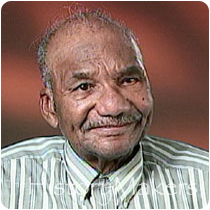 Born the third of 10 children on October 13, 1916, Frank Lumpkin is known for winning a 17-year fight against a steel mill, but he also participated in numerous other struggles for social justice. His family, sharecroppers in Washington, Georgia, moved to Florida to pick oranges when Lumpkin was six years old. At age 13, he lost two fingers when others dared him to touch a power line. Two years later, Lumpkin left school to pick fruit full-time.

As a young man, Lumpkin boxed well enough to fight professionally. He also worked in the orange groves and as a chauffeur. Following a brother who found better pay as a steelworker, Lumpkin moved to Buffalo, New York and got a job at Bethlehem Steel in 1941. Joining the merchant marines in 1943, he took part in a strike organized by the integrated National Maritime Union and his belief in communism took hold.

In 1949, Frank Lumpkin moved to Chicago and married Beatrice. The Wisconsin Steel Mill hired Lumpkin in 1950, and he quickly led an unsuccessful movement to bring a national union to his workplace. Lumpkin continued at the plant until 1980, when it closed down in a corrupt scheme to cheat its workers out of their last paychecks, pensions and benefits. The in-house union refused to fight, and Lumpkin organized the Save Our Jobs Committee. Under his leadership, the group picketed offices in Illinois and Washington, D.C. Fighting hard and long, Save Our Jobs finally succeeded in winning multiple court settlements that totaled $19 million. Although this represented a small monetary victory for the 2,500 workers the committee represented, Lumpkin succeeded in showing that united, people are strong.

Lumpkin has fought throughout his life for such causes as racial justice, living wages and peace. Mayor Harold Washington appointed him to task forces on hunger and dislocated workers. Frank and Beatrice Lumpkin have traveled internationally, visiting Eastern Europe and Russia behind the Iron Curtain as well as Africa and Latin America. Lumpkin remained a member of the Communist Party and the Save Our Jobs Committee, until his death on March 1, 2010.