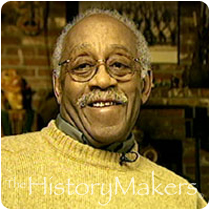 See how Frank Lucas is related to other HistoryMakers

Graphic designer Frank Lucas was born on August 29, 1930, in Cambridge, Massachusetts. He went on to become the first African American illustrator and photographer in Boston's advertising industry.

Raised in Cambridge, Lucas was attracted to art at an early age. With his talent, he was hired as an Army illustrator and photographer during the Korean War. After the war, he returned to Boston and graduated from the Vesper George School of Art in 1955. Lucas was then hired as a graphic designer at Parsons Friedmann and Central. He would later move to Barker Black Studios, where he worked primarily with publishers.

In 1966, Lucas was hired at Ginn and Company, a publishing house where he supervised art editors in the purchase of illustrations and photography for school textbooks. During his thirty-one years there, Lucas also managed packaging and oversaw art direction for the firm's advertising and promotional materials. Later, as director of art and design for children's trade books, Lucas pioneered new techniques in design, production and printing. He retired from the company in 1997. Since then, he has served as a consultant and art director to Course Crafters, a firm that produces materials for Sesame Street, Berlitz and several other educational publishers.

In addition to his work experience, Lucas has directed the career of many art students teaching art at several Boston art schools. He also taught graphic design and lectured at the famous Rhode Island School of Design. Lucas and his daughter, Diahanne, published a monthly New England newspaper, Reunion, for four years. Lucas has drawn wide praise and is the recipient of several awards for his professional work. He and his wife, Patricia Ann, have been married since 1957 and have three children. They reside in Sudbury, Massachusetts.

See how Frank Lucas is related to other HistoryMakers
Click Here To Explore The Archive Today!