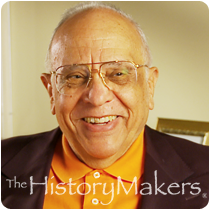 See how Frank Jones is related to other HistoryMakers
Donate Now

Academic administrator Frank Jones was born on November 9, 1928 in Greensboro, North Carolina to Dr. David D. and Susie W. Jones. His father had become the president of Bennett College two years before his birth. His mother was a homemaker who was very involved in her community. Her parents were graduates of Berea College in Kentucky during the late 1880s. In 1946, Jones graduated high school from Andover Phillips Academy in Andover, Massachusetts. Jones graduated with his B.A. degree from Harvard College (Harvard University) in 1950. After serving two years in the military and a few years working at a bank, he attended Harvard Business School, receiving his M.B.A. degree in 1957.

After completing business school, Jones was employed at the Harvard Business School as the assistant dean until 1962. He then worked as a marketing manager executive for Scott Paper Company where he had a very promising career. However, Jones was approached by Massachusetts Institute of Technology (MIT) President Howard W. Johnson and offered a job as assistant to the president at the school. He turned down that offer but accepted another job as assistant director of the Urban Systems Laboratory at MIT. Shortly thereafter, Jones was named Ford Professor of Urban Affairs and Planning and became the first African American tenured professor at the MIT in 1971. In addition to teaching civil engineering in the department of urban studies and planning, Jones was also actively involved on campus and within the larger community. He became director of the Whitney Young Program in 1971. This program was established through his department and allowed select local leaders to spend the equivalent of an academic year at MIT working with faculty on projects of special importance to them, their organizations or communities. Jones served on a committee to urge MIT to found the Office for Minority Education in 1974. The committee, comprised of faculty and students, wanted MIT to create that office whose mission was to recruit and retain minority students, implement programs to motivate academic performance, and to help minority students adjust to the MIT environment. In 1992, Jones retired and became professor emeritus at MIT.

Jones was active in the business community, joining numerous boards including The Corporation at Draper Laboratory, CIGNA and Connecticut General Insurance Corporation where Jones became the first African American board member. He generously supported charities including the Frank S. Jones Student Activity Fund at MIT which supported students working on community-based projects and activities.

Frank S. Jones was interviewed by The HistoryMakers on April 19, 2011.

See how Frank Jones is related to other HistoryMakers
Donate Now
Click Here To Explore The Archive Today!