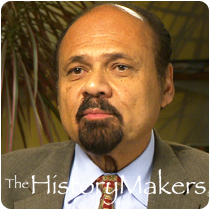 See how Frank Dale Morgan is related to other HistoryMakers

Geophysicist and professor F. Dale Morgan was born in Guyana in South America. Morgan also grew up in Guyana where he attended St. Stanislaus’ College. He attended St. Joseph’s College and the Polytechnic Institute in Trinidad. In 1970, Morgan earned his B.S. degrees in mathematics and physics from the University of the West Indies, Trinidad and Tobago. He then continued his studies at the University of the West Indies, where he earned his M.S. degree in theoretical solid state physics in 1972. His thesis was entitled: “Symmetry properties and dispersion relations in antiferromagnetic NiO and CoO.”

Morgan served as a lecturer in the physics department of the University of the West Indies until 1975, when he began attending the Massachusetts Institute of Technology (MIT) with the assistance of a joint Organization of American States (OAS)/Trinidad Government Scholarship. In 1981, he graduated from the Department of Earth and Planetary Sciences at the Massachusetts Institute of Technology. His Ph.D. degree was awarded for his thesis: “Electronics of sulfide minerals: implications for induced polarization.” Upon the completion of his degree, Morgan began work as a faculty member at the Massachusetts Institute of Technology. He then became a full professor of geophysics and the associate director of the Earth Resources Laboratory. Morgan’s interests include geoelectromagnetism, electrokinetics, applied seismology and environmental geophysics.

In 2005, Morgan was named the co-director of the Kuwait-MIT Center for Natural Resources and the Environment, a group that aims to promote research and education outreach in the areas of energy, water, and the environment. Morgan is responsible for several projects concerning the human use and the quality of water. The projects involve investigation of oilfield production brines and the injection of treated wastewater into natural groundwater aquifers. Morgan has served on a number of advisory committees and has published many academic papers in the field of geophysics. Morgan is married to Alison Morgan.

See how Frank Dale Morgan is related to other HistoryMakers
Click Here To Explore The Archive Today!