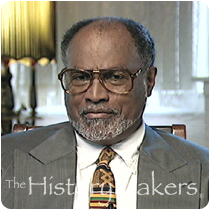 See how Francis Ward is related to other HistoryMakers
Donate Now

Usher Francis Ward was born in Atlanta, Georgia on August 11, 1935. After graduating from Booker T. Washington High School in 1953, Ward attended Morehouse College, earning his B.A. in English in 1958. From there, he attended Syracuse University, earning his master’s in journalism in 1961.

While attending Morehouse, Ward took a job at the Atlanta Daily World as a janitor, and after his graduation, he spent several months working as a proofreader and wrote a few articles. In 1964, Ward met Bob Johnson, and was hired by Jet magazine. In 1967, he was promoted to Ebony, and the following year he made the move to the Chicago Sun-Times. There, he covered the assassination of Martin Luther King, Jr., and the aftermath, as well as writing a tribute to Gwendolyn Brooks. In 1970, Ward became the Chicago correspondent for the L.A. Times, where he remained until 1978. That year, he joined the staff of the Miami Herald, and in 1980, he joined WHUT-TV at Howard University. In 1984, Ward joined the mayor’s press corps in Chicago as an assistant press secretary, and he remained there until 1989, working through the administrations of Harold Washington and Eugene Sawyer. After a brief teaching stint at the Medill School of Journalism at Northwestern University, he was hired by the Newhouse School of Journalism at his alma mater of Syracuse University in 1990. He remains there today.

Ward has always felt that journalism is a public service, and he has often spoken out on media responsibility. He and his wife, actress Val Gray Ward, live in New York.

See how Francis Ward is related to other HistoryMakers
Donate Now
Click Here To Explore The Archive Today!