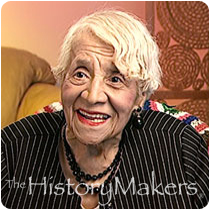 See how Frances T. Matlock is related to other HistoryMakers
Donate Now

Honored teacher and advisor, Frances Matlock was born in Chicago on January 6, 1907. She attended Proviso East High School, where she was the only black student in her 1924 graduating class. While a student, several exceptional teachers inspired Matlock to pursue a career in education. She earned an associate's degree from Chicago Normal College (now Chicago State University) and a bachelor's degree in Education from Northwestern University in 1928.

Matlock's prolific career has included work in elementary education as well as civic and community activism. She taught Social Studies for the Chicago Public School system at Hayes Elementary School and Forestville Elementary School from 1933-1972, and served on the Chicago Public School's Board of Education. She acted as an advisor to the NAACP's Youth Leadership Council from 1935-1941, overseeing the early efforts of such notables as Dr. Margaret Burroughs, founder of the African American Museum of Black History; Gwendolyn Brooks, Pulitzer Prize winning poet; and John Johnson, publisher of Ebony and Jet magazines. The council fostered the growth of these future leaders by participating in marches and demonstrations in protest of lynching. Shortly thereafter, Matlock put her public relations talents to work to help raise the funds to establish the Southside Community Art Center, which was dedicated by Eleanor Roosevelt in 1941. Matlock worked on a national level as a public relations and publicity assistant for the original March-On-Washington, in which demonstrators demanded that President Roosevelt provide jobs for Blacks in the World War II defense plants. From 1953-1993 she served as publicity chairman and archivist for the Chicago Chapter of The Links, Inc., an organization that provides financial support to college-bound youth.

Her interests and activities are international in scope. For her years of support and dedication to the Jamaican community, Matlock received Special Recognition from the Consul of Jamaica. In addition, Matlock was granted a Golden Alumnus Award from Chicago State University in 1999. The following year, Operation Uplift honored her with their Golden Heritage Award. In acknowledgment of her role as a teacher and mentor, and her unyielding work for her community, Matlock has been inducted into the Chicago Senior Citizen's Hall of Fame.

See how Frances T. Matlock is related to other HistoryMakers
Donate Now
Click Here To Explore The Archive Today!