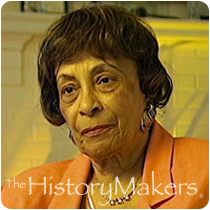 Favorite Color:
Red
Favorite Quote:
Be strong. We are not here to play, to dream, to drift.

Favorite Color:
Red
Favorite Quote:
Be strong. We are not here to play, to dream, to drift.

See how Frances L. Murphy, II is related to other HistoryMakers
Donate Now

Born on October 8, 1922, in Baltimore, Maryland, Frances Louise Murphy, II, grew up in a household that was focused on the newspaper the family published. Murphy’s grandfather, a former slave and Civil War veteran, founded the Afro-American in 1892; her father, Carl, was the editor and publisher of the paper and a professor of German at Howard University. Murphy's mother, Vashti, was one of the co-founders of the Delta Sigma Theta sorority and was trained as a teacher. Murphy taught until she married Carl Murphy; she then went on to earn her B.A. degree from the University of Wisconsin in 1944, where she majored in journalism. In 1958, Murphy earned her B.S. degree from Coppin College, and her M.Ed. degree from Johns Hopkins University in 1963.

During her summers, Murphy worked for the family paper. After graduating from the University of Wisconsin, Murphy went to work full-time for the Afro-American, and the paper expanded from a single edition to numerous local editions around the country. By 1956, Murphy was the city editor for the Baltimore edition of the paper. After earning her teaching degree from Coppin College, Murphy became an elementary school teacher; she went on to pursue her master's degree in education. Frustrated with her school assignment, Murphy resigned and began teaching English and working as the director of the news bureau at Morgan State University. Murphy stayed at Morgan State until 1971, when she was named chairman of the Afro-American. In 1975, Murphy left to become a professor of journalism at State University College in Buffalo, New York, and then on to Howard University in 1985. Murphy became publisher of the Washington Afro-American in 1987, and left Howard University in 1991; she served as editor of the editorial page and wrote the column, “If You Ask Me,” by Frankie Lou for several years.

Murphy was honored by numerous organizations for her achievements; she received the Women of Strength Award from the National Black Media Coalition in 1994 and 1995; the Woman of the 20th Century Award by the National Congress of Black Women; and was named one of the 100 Most Influential Black Americans by Ebony magazine. Murphy served on the boards of the Freedom Foundation, the University of the District of Columbia and the African American Civil War Memorial.

Frances Louise Murphy, II, passed away on Wednesday, November 21, 2007, at the age of eighty-five.

See how Frances L. Murphy, II is related to other HistoryMakers
Donate Now
Click Here To Explore The Archive Today!