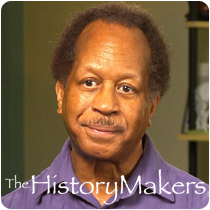 Favorite Color:
Blue
Favorite Food:
Salmon
Favorite Time of Year:
March, April,, May
Favorite Quote:
People don't care about how much you know until they know how much you care.

Favorite Color:
Blue
Favorite Food:
Salmon
Favorite Time of Year:
March, April,, May
Favorite Quote:
People don't care about how much you know until they know how much you care.

See how Floyd Williams is related to other HistoryMakers
Donate Now

Research professor and mathematician Floyd Leroy Williams was born on September 20, 1939 in Kansas City, Missouri. Born into and raised in an impoverished environment, his mother was a constant source of encouragement. She reminded him not to complain about their situation, but rather to maintain faith in God and always work hard. Ironically, as a high school student Williams excelled in music rather than mathematics. One week prior to graduating high school he was offered a scholarship from Lincoln University of Missouri in Jefferson City to study music. During his sophomore year, Williams was fascinated by Albert Einstein’s Theory of Relativity and eventually became fully immersed in the study of mathematics.

In 1962, Williams graduated from Lincoln University with his B.S. degree in mathematics. He went on to receive advance degrees in mathematics from Washington University in St. Louis, earning his M.S. degree and Ph.D. degree in 1965 and 1972, respectively. His doctoral thesis was in the field of Lie Theory, a particular branch of mathematics that focuses on symmetry. Williams has worked in this field for the past twenty years and recently has begun to investigate mathematical physics.

From 1972 to 1975, Williams worked as a lecturer and instructor at Massachusetts Institute of Technology as well as an associate instructor at the University of California-Irvine. He joined the faculty at the University of Massachusetts-Amherst in 1975 as an assistant professor. In 1978, he was promoted to associate professor and since 1984 he has been a full professor. Williams was awarded a National Science Foundation Major Research Instrumentation grant in 1983 to continue his research.

Williams is internationally renowned for his pioneering research in Lie Theory and mathematical physics. He served as visiting professor at a number of universities across the United States and the world, including the State University of New York-Stonybrook; Sophia University in Tokyo, Japan; the State Technical University in St. Petersburg, Russia; and the Institute of Theoretical Physics in Sao Paolo, Brazil. Williams’ scholarship is prolific, and his work has appeared in scholarly journals such as Topics in Quantum Mechanics and Mathematical Methods in Physics. Since 2005, he served as Professor Emeritus at the University of Massachusetts-Amherst.

See how Floyd Williams is related to other HistoryMakers
Donate Now
Click Here To Explore The Archive Today!