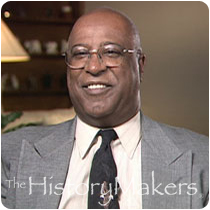 See how Floyd Powell is related to other HistoryMakers

Floyd Powell was born in Crescent, Oklahoma on October 28, 1946. Shortly after his birth, his family relocated to Wichita, Kansas. Powell attended Isley Elementary School, Roosevelt Middle School and graduated from Wichita's East High School in 1964. He received his degree in Police Science from Wichita State University in 1972.

In 1966, following two years at Friends University in Wichita, Powell worked for the Boeing Corporation. He left Boeing in 1968, to pursue a career in law enforcement. During his twenty-one year career with the Wichita Police Department, he became the first African American to serve as Chief of Police. His tenure as police chief was marked by a commitment to community involvement and victim outreach. Powell worked hard to build bridges between the police force and the city's minority communities. He developed special community action teams to work with officers addressing problems in low- income neighborhoods. One of his pet projects, the Teddy Bear Program, was directed at assisting the youngest victims of crime. Through this program, officers worked to comfort child victims with teddy bears. He also aggressively worked to increase minority recruitment for the department. Powell retired from the police force in 1989. That same year, he took a position as manager with his former employer Boeing.

Powell serves as the Funding Board of Director vice-president for the Boys and Girls Club of South Central Kansas. He is a father of four and resides in Wichita with his wife, Shirley.

See how Floyd Powell is related to other HistoryMakers
Click Here To Explore The Archive Today!