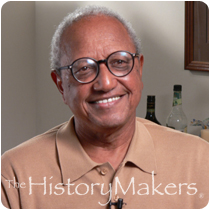 See how Floyd Norman is related to other HistoryMakers

Animator and script writer Floyd Norman was born on June 22, 1935 in Santa Barbara, California. He began producing animated films while he was still in high school. Early in his career, Norman worked with Bill Woggon on the animated comic book series, Archie. In the 1960s, Norman attended the Art Center School in Pasadena, California, majoring in illustration. After only two years of study, Norman was hired at Walt Disney Studios. He started working as an animator on the film, Sleeping Beauty and was promoted to the story department. Under Walt Disney’s personal supervision, Norman worked on the story sequence for scenes in the animated film, The Jungle Book.

Norman met fellow African American animation artist Leo Sullivan right after Sullivan graduated from college and began searching for employment. The two animators realized that they had similar interests and started working with each other on various animated films. Sullivan wrote and directed a short cartoon on the story of Christopher Columbus and later, the two produced an elaborate animated fantasy tale. Norman’s and Sullivan’s films helped Sullivan earn his first professional job in the animation industry. In the mid-1960s, Norman left Walt Disney Studios, and alongside Sullivan, founded Vignette Films, Inc. where they produced six animated films on the subject of black history. In the 1970s, Norman wrote and produced animated segments for Sesame Street, Villa Alegre and dozens of other educational films. In addition, Norman supervised the animation layout at Hanna-Barbera Productions and storyboarded several shows including The Flintstones, The Smurfs and Scooby Doo. In the 1980s, Norman returned to Disney and wrote the syndicated Mickey Mouse comic strip. Norman also worked on feature length animated films such as The Hunchback of Notre Dame, Mulan and Toy Story 2.

In 1999, Norman and Leo Sullivan created a multicultural internet site, www.Afrokids.com, designed to present a variety of African American images to children. At the Annie Awards in 2003, Norman won the Winsor McKay Lifetime Achievement Award.

Floyd Norman was interviewed by The HistoryMakers on November 5, 2007.

See how Floyd Norman is related to other HistoryMakers
Click Here To Explore The Archive Today!