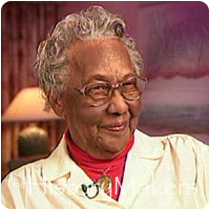 See how Florida Yeldell is related to other HistoryMakers

Educator Florida Jackson Yeldell lived out her father's dream in her life and career. Born in Georgetown, South Carolina, on January 2, 1915, Yeldell grew up in the town until she went to boarding school at Morris College at age fifteen. Yeldell remained until she earned her A.B. in English from the school in 1936 before moving to Andrews, South Carolina, where she taught fifth- and sixth-graders for two years.

Yeldell's father, a mail carrier, told his daughter of dreaming about returning to school to study history, which fascinated him because their Georgetown neighborhood was particularly rich in it. During the Great Depression, Yeldell did just that, receiving a scholarship from the National Youth Administration to study history at Howard University, where she earned an M.A. in 1941. She worked for the government during World War II and then embarked on a long career teaching at colleges in Texas. She first taught social studies at Butler College and taught U.S. history at Jarvis Christian College and Texas College. Yeldell finally settled down at Prairie View A&M, where she taught courses in Western civilization, U.S. history and social studies until retiring in 1979. Even after retiring, she continued to teach, working at Houston Community College, and lived in Texas for ten years before returning to her childhood home of South Carolina.

In retirement, Yeldell keeps active by volunteering to teach history. She gave guided tours at Brook Green Garden and worked with the Friends of the Library. Under the aegis of the Senior Scholars, Yeldell and David Drayton, principal of the last black-only school in Georgetown County, began teaching a course on the history of blacks in Georgetown County. For her work in teaching the history her father loved, Yeldell has been honored by Coastal Carolina University.

Yeldell passed away on May 25, 2006, with one son, five grandchildren and three great-grandchildren.

See how Florida Yeldell is related to other HistoryMakers
Click Here To Explore The Archive Today!