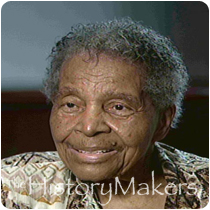 See how Florence M. Rice is related to other HistoryMakers

Florence M. Rice was born on March 22, 1919, in Buffalo, New York. She is the founder of the Harlem Consumer Education Council. During her childhood, Rice spent several years in the Colored Orphan Asylum and in several foster homes in New York. Upon completion of the eighth grade, Rice left school for work as a domestic seamstress where she became a member of the International Ladies Garment Workers Union. Rice spoke out against the discriminatory practices against African American and Latino workers. She participated in Harlem Congressman Adam Clayton Powell, Jr.’s 1962 congressional hearing, which probed dressmaker union’s policies, and after testifying, she was blacklisted.

Appointed Special Consultant to the Consumer Advisory Council of the Federal Reserve Board in the 1970s, Rice also taught consumer education at Malcolm-King College and has lectured to thousands at her workshops and seminars. In the 1990s, Rice was responsible for the Bell Atlantic Technology Center in Harlem. The center is dedicated to educating business people, students, senior citizens and other customers about the latest advances in telecommunication technologies. She has lectured in several countries, including South Africa where she was named a delegate in the first World Consumer Congress. Rice continues to work in consumer affairs in New York City where she lives.

See how Florence M. Rice is related to other HistoryMakers
Click Here To Explore The Archive Today!