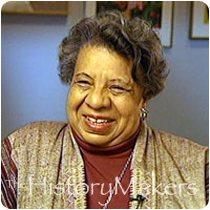 See how Florence Ladd is related to other HistoryMakers
Donate Now

Ladd first taught at Simmons College. She then traveled to Istanbul, Turkey, where she taught until 1964. In 1965, she returned to Boston and began teaching at Harvard University's Graduate School of Education, as well as at the Graduate School of Design. Teaching at both schools allowed her to simultaneously pursue her interest in psychology and environmental studies. In 1977, Ladd left Harvard University and the classroom and teaching for the Massachusetts Institute of Technology and administration, rising at M.I.T. to associate dean.

In 1979, Ladd was hired by Wellesley College, where she worked as dean of students at Wellesley College until 1984. She was then hired as a research consultant with the Institute of International Education's South African Education Program. A year later, she went to Oxfam America and served as a liaison to the United Nations. In 1989, Ladd returned to academia as to a unique multi-disciplinary center of advanced studies for women, the Bunting Institute at Radcliffe College. Ladd retired from the Bunting Institute in 1997.

Ladd is active in other fields as well. In 1996, she published her first novel, Sarah's Psalm, to critical acclaim. Currently, she is the overseer of the Museum of Fine Arts in Boston, as well as a member of the Board of Trustees of Hampshire College. Previously, she served on the board of the Institute of Contemporary Art in Boston.

See how Florence Ladd is related to other HistoryMakers
Donate Now
Click Here To Explore The Archive Today!