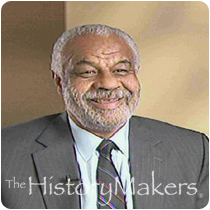 Lawyer and civic leader Fletcher “Flash” Wiley was born on November 29, 1942 in Chicago, Illinois. Four years after his birth, Wiley’s family moved to Indianapolis, Indiana, where he was raised. In 1953, Wiley was selected as a charter member of the “Gifted Child Program” by the Indianapolis Public Schools, in which he was the only African American in his class. Upon graduation from Shortridge High School in 1960, Wiley was recruited by the United States Air Force Academy and became the first African American from the State of Indiana appointed to a military academy, as well as the school’s first African American football player. As an athlete, he gained the nickname “Flash,” and in 1965, became the fifth African American graduate of the Air Force Academy and the Academy’s first black Fulbright Scholar. Wiley continued his studies at L’Institut Des Etudes Politiques at the University of Paris in France; and, in 1974, following his service as a captain in the U.S. Air Force, he received his M.P.P. degree from Harvard University’s Kennedy School of Government and his J.D. degree from Harvard Law School.

For almost four decades, Wiley has worked as a practicing attorney concentrating in the areas of corporate and commercial law, small business development, entertainment law and real estate. He helped form the Boston, Massachusetts-based law firm of Budd, Reilly and Wiley, the largest minority-dominant firm in New England. In 1996, Wiley joined PRWT Services, Inc., as vice president and general counsel; and before he retired from employment with PRWT in 2008, he helped build the company into one of the nation’s largest minority-owned businesses and Black Enterprise Magazine’s 2009 “Company of the Year”. He remains a member of the PRWT Advisory Board.

Wiley has served as a Director of several for-profit business organizations, including three public companies. He retired in 2011, after two decades as a Director of The TJX Companies, Inc. (NYSE). He is a director of the privately-held sports enterprise, Haymon Boxing, LLC. He is also of counsel to the law firm Morgan, Lewis & Bockius, LLP (formerly Bingham McCutchen LLP), where he specializes in corporate and commercial law. He is also chairman and chief executive officer of the Centaurus Group, LLC, where he serves as an investor and principal in several commercial, real estate development, and management consulting ventures.

Wiley has been involved in many civic and charitable activities. In 1984, he founded and chaired the Governor’s Commission on Minority Business Development. He also served for seven years, first as president and later as national chairman, of the Black Entertainment and Sports Lawyers Association, Inc.; and he later served for two years as chairman of the Greater Boston Chamber of Commerce. Wiley is also a founding member of the Black Alumni Associations of both the Harvard Law School and the Harvard Kennedy School. He is a benefactor of Crispus Attucks Children's Center, Inc.; a founding member of the Harvard Law School and the Harvard Kennedy School Black Alumni Organizations; a former Director of the New England Legal Foundation; Overseer of the New England Region Anti-Defamation League; and Chairman of the Board of The Dimock Center, Inc. He has also received numerous civic and professional awards, including induction into the 2010 “Academy of Distinguished Bostonians.” In 2011, he was named by U.S. Secretary of Defense Robert Gates to the Board of Visitors of The Air University; and in 2012, President Barack Obama appointed him to the Board of Visitors of the U.S. Air Force Academy. In 2012, he received Honorary Doctorates from Cambridge College and New England School of Law.

Wiley is a member of the Bars of the Commonwealth of Massachusetts and District of Columbia, and belongs to the American, National, and Massachusetts Bar Associations.

He and his wife, Benaree Pratt Wiley, live in Brookline, Massachusetts. They have two children: a son, Pratt, and a daughter, B.J.

Fletcher “Flash” Wiley was interviewed by The HistoryMakers on October 15, 2004.

See how Fletcher "Flash" Wiley is related to other HistoryMakers
Donate Now
Click Here To Explore The Archive Today!