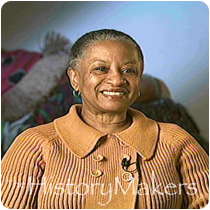 See how Ferne Yangyeitie Caulker is related to other HistoryMakers

Dancer and choreographer Ferne Yangyeitie Caulker was born on August 9, 1947, in Sierra Leone, Africa. Caulker studied with the National Dance Company of Ghana at the University of Ghana, Legon, then returned to the United States.

In 1969, Caulker founded the Ko-Thi Dance Company after returning from Ghana. The company was created to develop, educate, showcase and preserve African, Caribbean and African American dance and music. In the beginning, the company’s entire repertoire was created by Caulker. However, through the years, she developed and nurtured veteran choreographer/dancers and musicians who now contribute into the repertoire. Over the past thirty years, Caulker has developed a cadre of commissioned works by master dancers and musicians from throughout the African Diaspora.

Since 1981, Caulker and the Ko-Thi Dance Company have created major full length evening works, collaborating with various international artists from across world cultures, (East Indian, Irish), and cross disciplines, (Jazz and the spoken word), merging cross cultural forms such as the South African 'Boot Dance' and Tap. In 1995, Caulker received a Fulbright Research Fellowship, which allowed her to study in Tanzania, East Africa, for three months. While doing her own research, Caulker also taught at the University of Dar es Salaam, lectured children in the Arusha United African American Cultural Center and assisted a UWASA cultural group. In 1999, Caulker served on the Blue Ribbon Commission on the Arts in Education for the Wisconsin State Superintendent, and the following year, served for the National Endowment for the Arts 2000 Dance panel. She has proudly served on the Board of Directors of the Wisconsin Arts Board.

See how Ferne Yangyeitie Caulker is related to other HistoryMakers
Click Here To Explore The Archive Today!