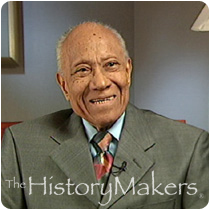 See how Fayard Nicholas is related to other HistoryMakers

Fayard Antonio Nicholas, eldest of the world famous, high-flying tap duo, "The Nicholas Brothers," spent his childhood on the road with his vaudevillian parents. He was born in their hometown of Mobile, Alabama, on October 20, 1914. His Father, Ulysses D. Nicholas, was a drummer and his mother, Viola Harden Nicholas, played piano. The two college educated musicians performed as the Nicholas Collegians or accompanied other acts or silent films. Nicholas' sister, Dorothy was born in 1920; the following year, Harold, who was named after silent film's Harold Lloyd, the "King of Daredevil Comedy," was born.

African American stars like Bill "Bojangles" Robinson, The Step Brothers, and Butterbeans and Susie were young Nicholas' extended family. He studied their routines from the wings and yearned to be on stage. He and his siblings devised a song and dance act that gained his parents' approval, and the three debuted as "The Nicholas Kids" in Philadelphia around 1927. From this emerged "The Nicholas Brothers." The brothers always performed last because nobody wanted to follow the kids' show stopping tap moves, especially the spectacular double "flying splits." The Nicholas Brothers opened at Harlem's Cotton Club in 1931, where the performers were black and the patrons white. While performing there, the brothers met Harold Lloyd, Georgie Jessell, and Bob Hope. One of the most popular routines at the Cotton Club was "Minnie the Moocher" with Cab Calloway, in which young Harold mimicked the real Cab and challenges him to a scatting contest. They brought the house down with their frenetic dancing to "Bugle Call Rag,"

The Nicholas Brothers went on to dance in their first film; a short entitled Pie Pie Blackbird with Eubie Blake's Orchestra in 1932. That was followed by Kid Millions with Eddie Cantor in 1934, The Ziegfield Follies in 1936, and Babes In Arms in 1937. The brothers garnered speaking roles in The Big Broadcast of 1936 and performed a number with Dorothy Dandridge, Harold's future bride, in 1941's Sun Valley Serenade. In 1943, the Nicholas Brothers starred in Stormy Weather with Fats Waller, Lena Horne, Cab Calloway and Katherine Dunham and thrilled audiences by dancing up a wall and back flipping to the floor in 1943s Orchestra Wives.

Nicholas served in the Army from 1943 to 1944. In 1948, the brothers sang and danced in a command performance for King Edward IV of England. They then toured South America, Asia and Europe in the 50s and 60s and made films including: Bonjour Kathrin in 1956 and Musik im Blut in 1956.

Nicholas returned to the United States starring on every major television variety program and headlining countless stage shows. Nicholas' first dramatic role was in 1970's The Liberation of L.B. Jones. Their tap students include: Janet Jackson, Debbie Allen, and Michael Jackson. The brothers have been honored by the Kennedy Center for the Performing Arts and have a star on the Hollywood Walk of Fame. Nicholas is now touring and lecturing about dance with his wife Katheryn Hopkins Nicholas. His brother, Harold, passed away in 2000. Nicholas passed away on January 24, 2006.

See how Fayard Nicholas is related to other HistoryMakers
Click Here To Explore The Archive Today!