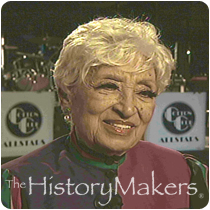 See how Fay Ray is related to other HistoryMakers
Donate Now

Fay Ray was born in 1919 in Louisiana. Life for Ray was not easy. At the age of eleven, Ray decided to leave a hard life of picking cotton. Dressed as a boy, she rode the train to Shreveport. There, she joined a Vaudeville circuit and traveled the nation. On the circuit, Ray learned to tap dance from some of the best dances of her day. At the age of sixteen, Ray left the vaudeville circuit to sing and dance solo.

During World War II, Ray stopped dancing for a time, moved to Providence, Rhode Island and became a certified welder at Walch Kaiser, welding ship seams for the navy. Ray danced in the first black USO show and traveled to Europe, the Middle East and the Far East. When she turned fifty years old, Ray retired from dancing, spent two years welding on the Alaskan Pipe Line and drove a New York taxi-cab.

In 1985, Ray joined a senior dance group with other former Harlem chorus girls, the Silver Belles. Managed by Geraldine Rhodes-Kennedy, the group began rehearsing at the Cotton Club, made their debut performance at the Latin Casino and have been performing ever since. The Silver Belles have appeared in Atlantic City and on Dan Rather’s 48 Hours. In 2006, the Silver Belles were featured in a documentary, Been Rich All My Life, about their lives, produced by filmmaker Heather Lynn MacDonald.

Fay Ray was interviewed by The HistoryMakers on October 18, 2007.

See how Fay Ray is related to other HistoryMakers
Donate Now
Click Here To Explore The Archive Today!