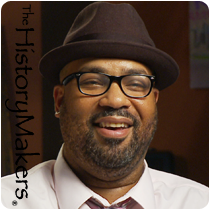 See how Fatin Dantzler is related to other HistoryMakers

Singer and songwriter Fatin Dantzler was born in Camden, New Jersey in 1973. Dantzler attended the Philadelphia High School for Creative and Performing Arts (CAPA) before transferring to Overbrook High School. Dantzler began his musical career in the early 1990s as a performer with a group called "Side by Side." He also became a producer and songwriter, contributing to the 1993 album by R&B pop stars "Bell Biv DeVoe." Dantzler left "Side by Side" to pursue songwriting and producing opportunities and later becoming affiliated with burgeoning Philadelphia hip-hop group "The Roots." In 1997, Dantzler met his future wife and musical collaborator Aja Graydon and two years later, they went on to form an R&B and Soul music duo called "Kindred the Family Soul." After being discovered by Jill Scott at a Philadelphia music showcase, "Kindred" signed a recording contract with Hidden Beach Recordings (HBR) in 2001. In March of 2003, the group released its first studio album titled, Surrender to Love, which peaked to seven and twenty nine on the Billboard Heatseekers and R&B albums’ charts, respectively. Two years later, the duo released their second studio album, In This Life Together, which climbed to number fifteen on the Billboard R&B chart. In 2006, Kindred’s song "My Time" was named the official song of the National Education Association’s Read Across America campaign. Kindred then released The Arrival, its third album on Hidden Beach, in 2008. The album rose to number seven on the Billboard R&B albums’ chart. The duo released its fourth album Love Has No Recession in 2011, which rose to number nineteen and fifteen on the R&B and Independent Albums’ charts, respectively. The group also launched a web-based reality television show in 2010.

Dantzler and his wife, Aja Graydon, have garnered critical acclaim with their work as "Kindred the Family Soul." In 2003, the duo garnered a Soul Train nomination. Three years later, the group was nominated for a BET Award. They have worked with Grammy Award-winning recording artists like Jill Scott, The Roots and Snoop Dogg. Dantzler and Graydon reside in Philadelphia and have six children.


FatinDantzler was interviewed by the The HistoryMakers on May 22, 2012.

See how Fatin Dantzler is related to other HistoryMakers
Click Here To Explore The Archive Today!