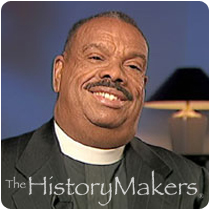 See how Father Richard L. Tolliver is related to other HistoryMakers

Father Richard L. Tolliver served as the rector of St. Edmund's Episcopal Church in Chicago, located on the city's South Side in the Washington Park neighborhood. A native of Springfield, Ohio, Tolliver held degrees from several institutions, including a B.A. degree in religion from Miami University in Oxford, Ohio; a master of divinity degree from the Episcopal Divinity School in Cambridge, Massachusetts; M.A. degrees in political science and Afro-American studies from Boston University; and a Ph.D. in political science from Howard University in Washington, D.C.

After his time in the Peace Corps, Tolliver took a position as a professor at Howard University. In June 1989, Tolliver became the rector at St. Edmund's Church; the church, which was established in 1905 to serve a congregation of largely Greek and Irish heritage, had become a largely African American congregation by the 1920s, serving the city's black middle- and upper-middle class families. At the time of his arrival, St. Edmund's suffered from financial problems and a surrounding neighborhood in decay. Tolliver formed the St. Edmund's Redevelopment Corporation (SERC) in 1990, which was designed to buy and rehabilitate multifamily buildings. Tolliver also organized the Michigan Avenue/Indiana Block Club, which was comprised of St. Edmund's parishioners who worked to reduce criminal activity in the church's surrounding neighborhood. The Michigan Avenue/Indiana Block Club also worked in conjunction with the Chicago Police Department's Chicago Alternative Policing Strategy. St. Edmund's also opened the International Charter School - St. Edmund's Campus on June 30, 2000, with an enrollment of 150 students in kindergarten through fifth grade.

Under the auspices of Tolliver and the SERC, more than 455 housing units were rebuilt; crime has also decreased sharply in the area since 1993. Tolliver's accomplishments have been featured in several publications, such as Business Week and Ebony; he received numerous honors and awards, including being listed in Who's Who of Black Americans , and being a regional finalist for a White House Fellowship.

See how Father Richard L. Tolliver is related to other HistoryMakers
Click Here To Explore The Archive Today!