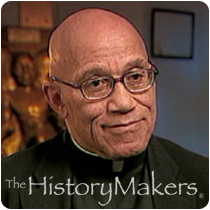 The fourth of six children, Father George Clements was born in Chicago, Illinois on January 26, 1932. After attending Catholic elementary and high schools, Clements went on to St. Mary of the Lake Seminary School, first earning a B.A. degree and then an M.A. degree in 1957.

Clements began his ministry in 1957 in the archdiocese of Chicago. He aligned himself with various social causes, especially the Civil Rights Movement. In 1968, while Chicago’s African American Catholics were calling for a black pastor, Clements was in the front running for the position. When the position of pastor was given to Father Rollins Lambert, many in the community were angry, including the Black Panthers, who Clements had served as group chaplain. When parishioners of St. Dorothy’s, Lambert’s former parish, began demanding Clements be appointed pastor, Cardinal John Cody instead placed him under Lambert. Following this, Clements went on a speaking tour at black colleges across the nation. In 1969, he was named pastor of Holy Angels Church, and while there, he harbored many Black Panthers wanted by the police.

Clements is the founder of the One Church-One Child, One Church-One Addict and One Church-One Inmate initiatives. In 1981, he became the first priest to adopt a child, and later adopted three more. His One Church-One Child program subsequently resulted in the adoption of more than 100,000 children nationwide. He has worked to help students from Africa secure higher education in the United States and has been active in the war on drugs. During the Million Man March in 1995, Clements announced plans for the One Church-One Addict program, wherein communities would provide aftercare for individuals who have been incarcerated. More than 1,000 churches in thirty-five states now belong to the program.

Clements was honored by numerous organizations, including the Kentucky State Senate, which issued a resolution praising his deeds. A film starring Lou Gossett, Jr., The Father Clements Story, was produced and broadcast by NBC in 1987.