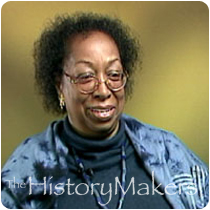 See how Fannie Rushing is related to other HistoryMakers
Donate Now

Specializing in the history and culture of African people in Latin America and the Caribbean, Professor Fannie Theresa Rushing was born in Chicago on February 3, 1943, and grew up in the community of Hyde Park. With family roots in Holly Springs and Meridian, Mississippi, Rushing traces her ancestors back four generations, three of which were college graduates on her mother’s side. Her paternal great uncle, the Reverend Charles Wesley Burton, earned a B.D. from Yale University and was a confidant of A. Phillip Randolph.

As a volunteer for the Student Nonviolent Coordinating Committee (SNCC), Rushing developed a keen interest in the civil rights movement while still at Hirsch High School. In 1961, Rushing briefly attended University of Illinois before serving as a SNCC field secretary and Freedom School teacher from 1962 to 1966.The recipient of numerous grants and fellowships, Rushing earned a B.A. in anthropology from Roosevelt University in 1974 and an M.Ed. in psychology from Chicago State University in 1986. She received her Ph.D. in history from the University of Chicago in 1992. Her dissertation is entitled Cabildos de Nacion, Sociedades de la Raza de Color: AfroCuban Participation in Slave Emancipation and Cuban Independence 1865-1895.

As coordinator of the Southern Africa Program of the American Friends Service Committee from 1976 to 1977, Rushing organized a major international conference on Trans National Corporations and Southern Africa. She has taught several courses over the years including: The African Diaspora in Latin America, Black Resistance in the Americas, Race and Power in Contemporary Brazil, and Culture and Literature of the Caribbean. She has also worked as Director of Minority Services at Rosary College, and as a lecturer at Northwestern University, Governors State University, Dominican University, Columbia College, University of Illinois, and DePaul University. Rushing is currently an associate professor in the Department of History at Benedict University.

See how Fannie Rushing is related to other HistoryMakers
Donate Now
Click Here To Explore The Archive Today!