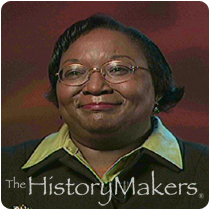 In addition to her work with the Coming Together Project, Brown is a member of Books for Africa and University of Akron College of Business Diversity boards. Brown received numerous awards and honors, including the 2000 Gimbel Child and Family Award, and an appointment to the Ohio Dr. Martin Luther King, Jr. Commission by Governor Bob Taft.

See how Fannie Lee Brown is related to other HistoryMakers
Donate Now
Click Here To Explore The Archive Today!