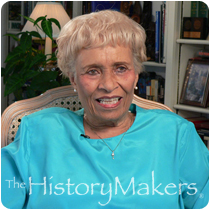 See how Evie Garrett Dennis is related to other HistoryMakers

Evie Garrett Dennis was born on September 8, 1924, in Farmhaven, Mississippi, to Ola and Eugene Garrett. She graduated from Cameron Street High School and received her B.S. degree from St. Louis University in 1953.

Dennis came to Denver, Colorado, as a researcher for the Children’s Asthma Research Institute and The Jewish National Home for Asthmatic Children. In 1966, she began her career in public education as a teacher. Dennis was instrumental in convening the first ever convention of The Athletics Congress (now USA Track & Field) in 1980. Since 1983, Dennis has chaired the El Pomar Foundation Awards for Excellence Commission, which recognizes and rewards Colorado nonprofit organizations, businesses, and individuals that serve their communities with distinction and excellence. She was the Chef de Mission for the United States Olympic Committee for two Pan American Games as well as the 1988 Olympic Games, a first for a woman in Olympics' history. Dennis was one of the first two women to reach the U.S. Olympic Executive Committee and the first to serve as Vice President of the U.S. Olympic Committee. She has chaired its Women’s Committee and Diversity Committee and remains a member of the Governing Bodies Council. She has been a staunch advocate and spokesperson for Title IX, ensuring equal access to sports for young women. Dennis served as Deputy Superintendent of the Denver Public School System from 1988 through 1990 and the District Superintendent from 1990 to 1994. She was the first woman and the first African American to head the 60,000-student district. Dennis was charged with implementing and monitoring the U.S. District Court order to desegregate Denver Public Schools. Through her dedication to improve and ensure equal educational opportunities for all students and to work with the community through the difficult issues presented by the court’s order, Dennis successfully guided the school system through a complicated and divisive period to create positive alliances between the school district, parents, students, teachers, patrons, and community leaders. She designed and implemented innovative programs to meet the needs of the district’s diverse population, including the Education Advisory Councils; the Denver Energy, Engineering and Education Program (DEEEP); and the American Israel Student Exchange Program. Dennis officially retired from the Denver Public School System in 1994.

Dennis was honored as an inductee to the Sportswomen of Colorado Hall of Fame in 1997. In 1999, she was named Laureate of the Association of National Olympic Committees. In addition, Dennis was inducted into the United States Track and Field Hall of Fame in 2004.

See how Evie Garrett Dennis is related to other HistoryMakers
Click Here To Explore The Archive Today!