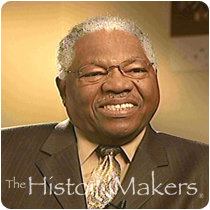 See how Everett Greene is related to other HistoryMakers
Donate Now

Singer Everett Francis Greene, Sr. was born on February 16, 1934 in Washington, D.C. to Lillian and Lawrence Greene. He grew up in the Barry Farms section of the Anacostia neighborhood of Washington, D.C. As a youth, Greene began performing in school quartets. He continued to perform with his quartet after entering the Marine Corps in 1952. Following a tour in Korea, Greene married and started a family in Indianapolis, Indiana. He worked as a mold maker and then in the melting department in Indianapolis’ industrial manufactories. It was not until after his retirement in 1982 that Greene focused on his professional music career.

Greene was a bass singer who trained himself to sing at a higher range. He performed in his church and regularly throughout the local Indianapolis music scene. He recorded his debut album, "At Last," in Chicago in 1994, followed by his release of "My Foolish Heart" in 1998 and "I’ve Got Love" in 2002. He was then featured with the Buselli-Wallarab Jazz Orchestra on the album, Heart & Soul: The Music of Hoagy Carmichael.

Greene has co-starred with folk singer Odetta Gordon and Broadway star Jean DuShon in an extended run of The Little Dreamer: A Night in the Life of Bessie Smith at the Ivanhoe Theater in Chicago. In addition, Greene has portrayed "Joe" in Showboat. Greene received a local Emmy Award in Chicago for the nationally-aired TV special entitled Precious Memories: Strolling 47th Street. He has been in a number of television commercials for The Hoosier Lottery, the Indiana Pacers, H.H. Gregg and Cincinnati Bell. Greene has toured in the United States, Japan and Canada with the musical revue In the House of the Blues.

Everett Greene was interviewed by The HistoryMakers on November 12, 2007.

See how Everett Greene is related to other HistoryMakers
Donate Now
Click Here To Explore The Archive Today!