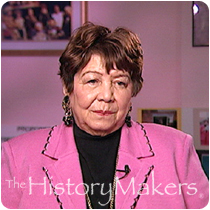 Civil rights activist and leader Evelyn Gibson Lowery has been at the forefront of many human and civil rights struggles since an early age. She is the daughter of activists Rev. Dr. Harry and Evelyn Gibson, and they provided her with the inspiration that became the foundation for a lifetime of involvement in human rights at both the national and international levels. After high school, Lowery attended Clark College and Youngstown University.

Lowery is married to Reverend Dr. Joseph E. Lowery, President of the Southern Christian Leadership Conference (SCLC), and has been involved in the movement since 1957. In 1979, Lowery became the founder and chairwoman of the fastest growing department of the SCLC. SCLC's Women's Organizational Movement for Equality Now (SCLC/W.O.M.E.N.) was the manifestation of a vision of a woman whose commitment to improving the quality of life went beyond the boundaries of color. Immediately after the development of SCLC/W.O.M.E.N., she moved to develop coalitions and alliances with a variety of women's groups throughout the nation and other parts of the world.

Lowery has been involved in many civil rights struggles. She has marched, boycotted, served jail time and traveled the world spreading the message of human and civil rights. Her dedication to civil rights and human rights has not gone unnoticed. In Atlanta, she was one of a five-member committee appointed by former Mayor Maynard Jackson to make arrangements for clothing and burial of missing and murdered children. She has served as a member of the board of directors of the Metropolitan Christian Council of Atlanta, and has worked with the YWCA, Church Women United, and many other organizations. Lowery has received numerous awards and recognition for her leadership and service including the YWCA Academy of Women Achievers Award, the APEX Museum's Tribute Award to Black Women for Achievement in Civil Rights (Collections of Life and Heritage); the Rosa Parks Award; WXIA-11 Alive Community Service Award; and the Atlanta Business League's Women of Vision - 100 Most Influential Women of Atlanta, to name a few.

At the time of the interview, Lowery was still very active in her community. She continued to work with the SCLC/W.O.M.E.N, and with her husband to spread the message to encourage African Americans to vote.

See how Evelyn Gibson Lowery is related to other HistoryMakers
Donate Now
Click Here To Explore The Archive Today!