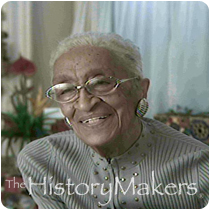 See how Evelyn Cunningham is related to other HistoryMakers

Evelyn Elizabeth Long Cunningham was born on January 25, 1916 in Elizabeth City, North Carolina to Clyde Long and Mary Whitehurst. Cunningham’s grandmother was named Ellen Whitehurst, and she worked as a reporter for the Elizabeth City Daily News. Cunningham’s family relocated to New York City when she and her brother, Clyde, were young. Cunningham’s parents decided to relocate after hearing Cunningham say that her life ambition was to pick cotton when she grew up. Cunningham attended P.S. 9 Elementary School and P.S. 136 High School in New York City. She later attended and graduated from Hunter High School in 1934. Cunningham then attended Hunter College and transferred to Long Island University where she earned her B.A. degree in social science in 1943. She also attended Columbia University School of Journalism and the New York School of Interior Design.

Before finishing her undergraduate study, Cunningham began writing for the Pittsburgh Courier. She remained at the publication from 1940 to 1962 working as a reporter, columnist and editor, reporting and commentating on social issues and the Civil Rights Movement. In 1961, Cunningham started her own radio show called At Home with Evelyn Cunningham on WLIB Radio, where she further discussed and commentated on social and racial issues. Her first guest was Malcolm X. In 1966, she served as Jackie Robinson’s executive assistant. From 1967 to 1969, Cunningham worked as special assistant of community relations to then New York Governor Nelson Rockefeller and worked as Deputy Campaign Manager for the National Rockefeller for President Committee in 1968. In 1970, Cunningham served on the Rockefeller Latin America Mission, and between 1969 and 1974, she worked as special assistant to New York Governors Rockefeller and Malcolm Wilson, and was Director of the Women's Unit for the Office of the Governor of New York. Between 1975 and 1976, Cunningham served as special assistant to U.S. President Gerald Ford, Office of Vice President Rockefeller. Between 1964 and 1990, Cunningham was appointed to more than a dozen government commissions.

Cunningham has received several awards during her career including New York City’s Century Club’s Women of Year Award, 1998; the Harlem Renaissance Award from the Abyssinian Development Corporation, 1998; and an honorary doctorate from the City University of New York, 1997.

Cunningham is still active today. She has been married three times and lives in New York City.

Cunningham was interviewed by The HistoryMakers on December 7, 2006.

See how Evelyn Cunningham is related to other HistoryMakers
Click Here To Explore The Archive Today!