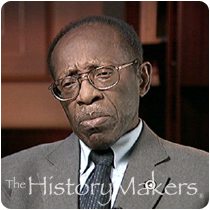 See how Evans Crawford is related to other HistoryMakers

Theologian and academic administrator Evans Edgar Crawford, Jr. was born on July 2, 1923 in Temple, Texas, to Mary Enge and Evans Edgar Crawford, Sr. A Methodist preacher, his father travelled often due to his job with the Santa Fe Railroad. Following the death of his mother, a former teacher, when he was just three years old, Crawford was raised by his paternal grandmother, Rosie Crawford. Religion was extremely important in his family, and Crawford was called to the ministry at the age of eleven. In 1939, Crawford graduated from Dunbar High School, where his extracurricular activities were devoted to speech and oratory competitions. In 1943, Crawford received his B.S. degree from Huston College (now Huston-Tillotson College). He continued his education at the Boston University School of Divinity, earning his bachelor’s degree in sacred theology in 1946 and his Th.D. degree 1957. In 1949, Crawford married his wife Elizabeth.

Crawford spent his professional career at Howard University where he began in 1958 as a theology instructor and acting dean of the university chapel. For nearly fifty years, he served in a number of posts at Howard, including Dean of Andrew Rankin Memorial Chapel, Assistant Professor, Acting Associate Dean of the school of Divinity and Interim Vice President for University Advancement. He retired in 1991 as professor emeritus of social ethics but continues to teach courses on preaching and social ethics as an adjunct professor at the Howard University School of Divinity.

In 1996, Crawford served as president of the Academy of Homiletics, an international organization of instructors who teach preachers. He also served as president of the National Association of College and University Chaplains, as a Danforth Associate and a member of the Northern Illinois Conference of the United Methodist Church. He is the author of several books about the African American church, including The Hum: Call and Response in African American Preaching (1995).

Evans Crawford, Jr. was interviewed by the The HistoryMakers on September 23, 2004.

See how Evans Crawford is related to other HistoryMakers
Click Here To Explore The Archive Today!