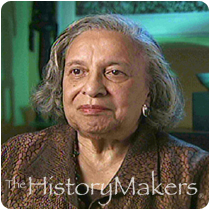 See how Evangeline Montgomery is related to other HistoryMakers
Donate Now

Curator and printmaker Evangeline "EJ" Montgomery was born on May 2, 1930, in New York. Her mother, Carmelite Thompson, was a homemaker and her father, Oliver Thompson was a Baptist minister. She discovered her artistic talents when she received her first oil painting set at the age of fourteen. After her parents separated, Montgomery and her mother moved to Harlem in New York, New York. In 1951, Montgomery earned her high school diploma from Seward Park High School in lower Manhattan, where she was a cheerleader, a member of the swim and basketball teams and a member of student government.

From 1951 until 1954, she worked at statuaries, painting the faces on dolls and religious statues. In 1955, Montgomery moved to Los Angeles with her husband and worked for Thomas Usher, an African American jewelry designer. She received her B.F.A. degree from the California College of Arts and Crafts (now California College of the Arts) in 1969 and she worked as an independent curator to museums, university galleries and art centers where she organized exhibits. In 1971, she served as the curator for the Rainbow Sign Gallery in Berkeley, California before becoming an exhibition specialist for the American Association for State and Local History in Nashville, Tennessee and coordinating eight national workshops on “Interpreting the Humanities through Museum Exhibits.” She also organized national exhibit workshops for the Association of African American Museums. In 1983, Montgomery began her career with the United States State Department as a program development officer for the Arts America Program, specializing in American exhibitions touring abroad. In this capacity, she developed and implemented successful American fine art programs in the United States and throughout the world. In her own art career, Montgomery is noted for her metal work, especially her metal ancestral boxes which were inspired by the Chinese incense boxes her mother used for praying. Her colorful lithographs have also garnered her attention, being prominently displayed in exhibitions funded by the United States government.

In 1997, she was diagnosed with Parkinson's disease which has made it difficult for Montgomery to work with metal. However, she has not let the diagnosis limit her artistic vision, instead shifting her focus to printmaking, lithographs, and the digital arts. In 2005, Blacks In Government (BIG) began the Evangeline J. Montgomery Scholarship Program, to encourage and fund artists who are interested in working in government to spread the influence of the arts.

Evangeline "EJ" Montgomery was interviewed by The HistoryMakers on December 13, 2004.

See how Evangeline Montgomery is related to other HistoryMakers
Donate Now
Click Here To Explore The Archive Today!