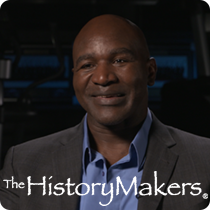 "I Can Do All Things Through Christ Who Strengthens Me"

Boxer Evander Holyfield was born on October 19, 1962 in Atmore, Alabama, to Annie Riggen Holyfield and Isom Coley. Holyfield’s family moved to Atlanta, Georgia when he was four years old and at eight years old, he joined the Boys & Girls Club and met Carter Morgan, who introduced him to the field of boxing. Holyfield graduated from Fulton High School in 1980.

In 1984, Holyfield became the National Golden Gloves Champion and went on to represent the United States at the 1984 Summer Olympics in Los Angeles, California, where he received the bronze medal in the light heavyweight division. He turned professional at the age of twenty-one, and moved to the cruiserweight division in 1985, and won his first world championship the following year for the WBA title. He became the undisputed cruiserweight champion after defeating Ricky Parkey and Carlos de Leon and winning the WBC and IBF titles.

In 1988, Holyfield moved up to the heavyweight division and later defeated Buster Douglas in 1990 to claim the unified WBA, WBC and IBF heavyweight titles and the undisputed heavyweight championship. He successfully defended his titles against heavyweights like George Foreman and Larry Holmes, before his first professional loss to Riddick Bowe in 1992. The following year, Holyfield regained his WBA and IBF titles in a rematch with Bowe. In 1994, he lost those titles in a match against Michael Moorer. That year, Holyfield was forced to retire after being diagnosed with a heart condition. He returned to boxing a year later, and defeated Mike Tyson in 1996 to reclaim the WBA title becoming the first boxer since Muhammad Ali to win a world heavyweight title three times, in what The Ring magazine named the “Fight of the Year” and “Upset of the Year.” In the 1997 rematch with Tyson, Holyfield won after Tyson was disqualified for biting Holyfield’s ear. Holyfield also later reclaimed the IBF title from Moorer.

Evander Holyfield was interviewed by The HistoryMakers on January 24, 2017.