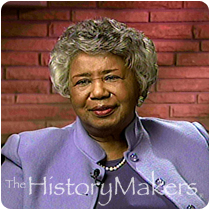 See how Eva Evans is related to other HistoryMakers
Donate Now

Reared in Detroit, Michigan, Evans attended the city’s public elementary and high schools and went on to earn her B.S. degree from Wayne State University. She later attended Michigan State University where she received her M.A. degree and her Ph.D. While at Wayne State, Evans was initiated into the Xi Chapter of the AKA Sorority. For a period, she was affiliated with the Detroit Chapters and transferred her membership to the Delta Tau Omega Chapter after returning to Lansing.

With her career in education, Evans served as a classroom teacher, building administrator, Division Director, Assistant Superintendent and then the number two position of Deputy Superintendent of Lansing Public Schools when she retired.

Evans has served the AKA Sorority in a variety of key roles. At the local level, she served as graduate advisor, auditor and chapter Basileus. In addition, she served as Regional Director of the Great Lakes Region and at the national level, she was the National Program Chairman. She was also a frequent workshop presenter at Boulés and the Leadership Fellows Program. Evans worked with the Sorority’s 20th International President, Dr. Barbara K. Phillips, and helped to shape the national foci of her administration.

Evans was elected First-Vice President in 1990 in Richmond, Virginia. She was installed as the 24th International President in 1994 in Indianapolis, Indiana. The theme of Evans’ administration was “Building the Future: The Alpha Kappa Alpha Strategy: Making the Net Work.” She networked with major entities in the United States to make this a reality including, Elizabeth Dole of the American Red Cross and the Pillsbury Corporation for a partnership in mathematics and science (PIMS) which became her administration’s signature program. She also began the Public Policy Forums in Washington, D.C.

Evans has received countless honors in her hometown including the YWCA’s Diana Award for Excellence in Education; the NAACP’s Educator of the Year; Lansing Chamber of Commerce’s Althena Award; Crystal Apple Award for Education from Michigan State University and the Applause Award from the Lansing Center for the Arts. She also has served as the Grand Marshall of the African American Parade and Family Picnic in Lansing which began in 1999. In 2006, Evans was inducted into the Michigan Women’s Hall of Fame.

Evans was interviewed by The HistoryMakers on February 28, 2008 as part of the Alpha Kappa Alpha Sorority’s Centennial Boulé 2008 celebration. Segments of these interviews were used in a DVD entitled A.K.A. Sorority: A Legacy of Supreme Service.

See how Eva Evans is related to other HistoryMakers
Donate Now
Click Here To Explore The Archive Today!