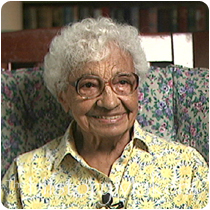 See how Eugenia Fortes is related to other HistoryMakers

Civil rights activist Eugenia Fortes was born in Brava, in the Cape Verde Islands, on November 14, 1911. Her father, Antonio, traveled to America, and Fortes had to wait until she was nine years old before being able to join her father. After a journey of thirty-one days, Fortes arrived in Whaling City, New Bedford, Massachusetts.

In 1928, Fortes found work at the artificial pearl company in Hyannis, and two years later, became a housekeeper for a family in Hyannisport. She remained in that position for the next twenty-seven years, and in 1957, she became a cook at a local school until her retirement in 1968. An outspoken activist for the poor and racial equality, in 1945, Fortes and a friend visited East Beach in Hyannisport, which was then segregated. Asked by the police to leave, Fortes refused. The following year, a group attempted to buy the beach and privatize it, but Fortes stepped forward in a town council meeting and lambasted the idea, telling of the discrimination she faced.

Fortes founded the Cape Cod chapter of the NAACP in 1961, but by then, she was already well steeped in the Civil Rights Movement. One of the tenants who rented her cottage from her was future Supreme Court Justice Thurgood Marshall, and in 1955, Reverend Martin Luther King, Jr., spent Thanksgiving and Christmas on the island. In 1961, when the Freedom Riders came through Hyannis, Ted Kennedy came to get a report from her to be delivered to the White House. As a fighter for the poor, Fortes sent food and clothing to impoverished counties in the Deep South for twenty-five years.

Fortes was a member of the Hyannis library board of directors for forty years, and was on the United States Civil Rights Commission for fourteen years. She also received numerous awards for her civil rights work. In 2004, the beach Fortes refused to leave in 1945, East Beach, was renamed Fortes Beach.

See how Eugenia Fortes is related to other HistoryMakers
Click Here To Explore The Archive Today!