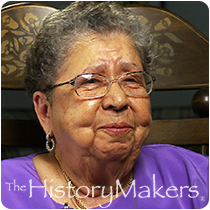 See how Eugenia Collier is related to other HistoryMakers
Donate Now

After graduating from Columbia University, she worked as a caseworker from 1950 to 1955 with the Baltimore Department of Public Welfare. In 1955, she joined the faculty at Morgan State College (now Morgan State University) as an English instructor. She remained at Morgan State until 1966, as assistant professor. From 1966 to 1996, she taught English at several other colleges and universities, including the Community College of Baltimore (1966-1974), the University of Maryland, Baltimore County (1974-1977), Howard University (1977-1987), Coppin State College (now Coppin State University) (1987-1992) and Morgan State University (1992-1996). She also served as a visiting professor at Southern Illinois University and Atlanta University. She then served as a consultant for several schools and organizations, including Workshop of Center for African and Afro-American Studies (1969), Call and Response Workshop at Karamu House (1970), Pine Manor Junior College (1970) and Bond Humanities Fair, Atlanta, Georgia (1973-1974). In 1996, she retired from teaching.

In 1969, Collier published "Marigolds," which remains a widely read short story. Collier has written or co-written a number of other short stories, essays and books. Collier won the Gwendolyn Brooks Prize for Fiction award in Negro Digest in 1969 for “Marigolds.” She also received the Outstanding Educators of America Award in 1972 and the Distinguished Writers Award by the Middle Atlantic Writers Association in 1984. Her work has appeared in the Negro Digest, Black World, TV Guide, Phylon, College Language Association Journal and The New York Times. Collier has been a member of several organizations, including the College Language Association, the Association for the Study of Negro Life and History, the Middle Atlantic Writers Association and the African American Writers Guild.

Eugenia Collier was interviewed by The HistoryMakers on August 7, 2013.

See how Eugenia Collier is related to other HistoryMakers
Donate Now
Click Here To Explore The Archive Today!