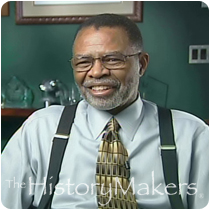 See how Eugene Morris is related to other HistoryMakers
Donate Now

Pioneering advertising executive Eugene Morris, Jr. was born in Chicago, Illinois on July 25, 1939. The youngest of four siblings, Morris was raised in Chicago’s historic Bronzeville neighborhood. Owning several restaurants, Morris’ parents, Eugene Morris, Sr. and Willie Mae Morris, instilled an entrepreneurial spirit in their son. At the age of twelve, Morris and a childhood friend started a junk resale business with local thrift and resale shops as their clients. In 1952, Morris graduated from Forestville Elementary School. He then attended Tilden High School, graduating in 1956.

Morris attended several community colleges, and was later drafted into the U.S. Army in 1962. He was stationed in Kentucky at Fort Knox, in South Carolina at Fort Jackson, and overseas in Germany. By 1968, Morris returned to Chicago and obtained a job with the advertising agency of Foote, Cone, and Belding. He worked for several years at Foote, Cone, and Belding while attending Roosevelt University. In 1969, he received his B.A. degree in business administration and his M.B.A in 1971 from Roosevelt University. During the period between 1974 and 1986, Morris worked as an account supervisor and senior vice president management supervisor at Burrell Advertising Agency. He developed advertising programs for clients including Coca-Cola, McDonald’s and Johnson Products.

See how Eugene Morris is related to other HistoryMakers
Donate Now
Click Here To Explore The Archive Today!