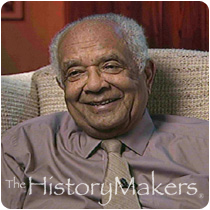 See how Eugene Henry Webb is related to other HistoryMakers

After high school, Webb worked as a dining car waiter on the Seabound Rail Road and the New York Coastal Railroad. In 1941, he joined the U.S. Navy, serving for two years during World War II. After his honorable discharge, Webb moved to Harlem, and began attending school. After attending Columbia University, he went to work in the real estate industry, and in 1968, opened his own brokerage, Webb & Brooker, Inc. Today, after almost forty years, Webb & Brooker is one of the most successful real estate management brokerage firms in Harlem.

Webb has been active in the Harlem community for decades, having been a part of the group that helped to found both Carver Federal Savings and Loan Bank and Freedom National Bank. He later served as chairman of the executive board of Freedom National Bank. He has been a member of the Real Estate Board of New York for twenty years, and a member of the Columbia Society of Real Estate Appraisers for almost four decades. He is also a former member of the board of trustees of Cambridge College and Stillman College, and has received honorary doctorates from Miles College and the New York Podiatric College of Medicine.

See how Eugene Henry Webb is related to other HistoryMakers
Click Here To Explore The Archive Today!