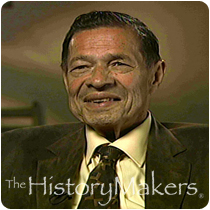 See how Eugene H. Dibble, III is related to other HistoryMakers
Donate Now

Eugene Heriot Dibble, III, was born on July 22, 1929, at the Tuskegee Institute in Alabama where he was one of four children born to Dr. Eugene Heriot Dibble, Jr., a physician at A. Andrew Memorial Hospital in Tuskegee. Dibble graduated from the Monson Academy preparatory school in Massachusetts and then received his B.S. degree in chemistry from the Tuskegee Institute in 1952. During his undergraduate career, Dibble also worked in the chemistry laboratory at John A. Andrew Memorial Hospital under the tutelage of famed immunologist Dr. Reuben Kahn at the University of Michigan. Following college graduation, Dibble was called to active duty in the United States Air Force and served as a munitions and demolition officer. He was discharged at the rank of second lieutenant. Following his tenure in the U.S. Air Force, Dibble attended the New York Institute of Finance and completed the broker’s trainee program in 1954. Only a year later, Dibble passed the examination to become a registered stock broker on the New York Stock Exchange.

Dibble worked as a stockbroker for the investment firm of Strauss, Blosser and MacDowell from 1956 until 1962. Dibble was one of only three African American stockbrokers working in Chicago investment firms. In 1965, Dibble and Rufus Cook began the Astro Investment Company. The goal of this business was to expand African American influence within the economy through direct investment. Muhammad Ali was one of his clients. In 1966, Dibble ran as the Republican candidate for Water Commissioner for the City of Chicago and was elected to a six-year term. He also served as trustee and chairman of the Metropolitan Sanitary District’s Committee on Maintenance and Operation in 1972. Following his tenure in this position, he owned numerous businesses including Jackson Parks Storage, Piggley Wrigley Bar-B-Q, New Racks Garage and Olly Trolly. In addition to these business endeavors, Dibble also volunteered for the Salvation Army Canteen Program.

Dibble received numerous civic awards, including Honorary Sheriff of Maywood and the Danny Davis Congressional Roll of Honor. He married Jeanette Campbell on August 6, 1955. She is a graduate of Wellesley College and the Yale University School of Nursing. The couple has five children: Rochon, Chyla, Eugene, Andrew and Hillary.

Dibble was interviewed by The HistoryMakers on July 14, 2008.

See how Eugene H. Dibble, III is related to other HistoryMakers
Donate Now
Click Here To Explore The Archive Today!