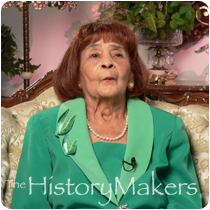 See how Ethel Bradley is related to other HistoryMakers
Donate Now

Civic leader Ethel Bradley was born in Tyler, Texas to Benjamin and Lucille Arnold on February 9, 1919. In 1941, she married Thomas Bradley, a man she met at The New Hope Baptist Church as a teenager. Thomas Bradley, the son of share-croppers, was from a less socially prominent family than Bradley. Thomas worked as a police officer and then went on to earn a law degree. The Bradley’s had two daughters, Phyllis and Lorraine.

Thomas Bradley’s political career began when he was elected as a representative of 10th District to the Los Angeles City Council . In 1973, Thomas became the first African American mayor of Los Angeles, California. Over the next twenty years, Ethel Bradley would become a humanitarian as the first lady of Los Angeles. As first lady, she was known for being an avid Dodgers fan and cultivating fuschia flowers at the Getty Mansion, the mayoral residence. Bradley organized a women’s volunteer corps, Las Angelenas and was co-founder of the Black Women’s Forum. She also worked with the YWCA and the Los Angeles Human Relations Commission. In 1992, Thomas Bradley joined the downtown law offices of Brobeck, Phleger & Harrison. His law career came to a premature end when in 1996 he suffered a heart attack and stroke, which left him unable to speak. Two years later, her husband suffered a fatal heart attack. Over 1,700 people attended his funeral at the African Methodist Episcopal Church. One attendee at the funeral, Vice President Al Gore, spoke in his honor. Bradley donated over 100 of her late husband’s artifacts to the California African American Museum in 2000.

In 2003, The Tom and Ethel Bradley Foundation was established. The goals of this foundation were, to honor the legacy of both of the Bradley’s and to encourage individuals to become responsible citizens. In 2006, The Ethel Bradley Early Education and Health Career Center was unveiled by the Los Angeles Unified School District, it was envisioned by the co-founders of the Black Women’s Forum. This center was designed to provide training, employment and childcare to the Los Angeles, California community.

See how Ethel Bradley is related to other HistoryMakers
Donate Now
Click Here To Explore The Archive Today!