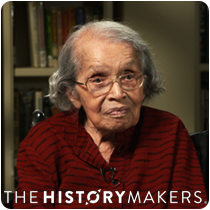 See how Esther Jackson is related to other HistoryMakers
Donate Now

Civic activist Esther Jackson was born on August 21, 1917 in Arlington, Virginia to Esther Irving and George Cooper. She graduated from Paul Laurence Dunbar High School in Washington, D.C. in 1934, and enrolled at Oberlin College in Oberlin, Ohio, where she earned her B.A. degree in social work. Jackson went on to earn her M.A. degree in sociology at Fisk University in Nashville, Tennessee in 1940. Her thesis, The Negro Woman Domestic Worker in Relation to Trade Unionism, examined the issues faced by African American domestic workers, and the benefits of labor unions.

Jackson joined the Southern Negro Youth Congress (SNYC) in 1940 and became a member of the voter registration project in Birmingham, Alabama. From 1942 to 1946, she worked as the organization’s executive secretary. In 1947, Jackson and her family moved to Detroit, Michigan, where she became active with the local branches of the Progressive Party and the Civil Rights Congress. During the 1950s, Jackson worked for the National Committee to Defend Negro Leadership and the Families of Smith Act Victims. In 1961, Jackson became the managing editor of Freedomways, a globally distributed journal that featured the work of Derek Walcott, C. L. R. James, Julius K. Nyerere, Alice Walker and Nikki Giovanni. Jackson also co-edited the books Black Titan: W. E. B. DuBois, published in 1970, and Paul Robeson: The Great Forerunner, published in 1978. Jackson remained the managing editor of Freedomways until it ceased production in 1985. In 2015, Sara Rzezutek Haviland published, James and Esther Cooper Jackson: Love and Courage in the Black Freedom Movement, a biography detailing Jackson and her husband’s activism.

Jackson was the recipient of several awards including the 1987 Community Contribution Award from the Harlem School of Arts, the 1989 Lifetime Achievement Award from the New York Association of Black Journalists, and the 1990 Mary Church Terrell Award from Clara Barton High School. In 2003, Jackson was awarded an honorary doctorate degree of Humane Letters from the Brooklyn campus of Long Island University.

Jackson and her late husband, James Jackson, had two daughters.

Esther Jackson was interviewed by The HistoryMakers on November 15, 2018.

See how Esther Jackson is related to other HistoryMakers
Donate Now