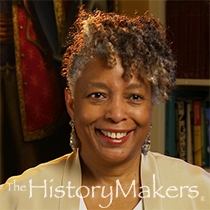 Media and advertising executive Esther “E.T.” Franklin was born on July 21, 1957 in Chicago, Illinois. Her mother, Dolores Johnson, was a teacher; her father, Leon Johnson, a teacher and minister. Raised in Wilberforce, Ohio and Chicago, Illinois, Franklin graduated from Evanston Township High School in 1975. She received her B.S. degree in business administration from the University of Illinois at Champaign-Urbana in 1979 and her M.M. degree from Northwestern University’s Kellogg Business School in 1993. Franklin has also completed certificate programs at the University of Chicago and Northwestern University.

In 1980, Franklin was hired as a field project director at Market Facts, Inc. in Chicago. From 1982 to 1993, she worked for Burrell Communications, first as a market research analyst, and later as vice president and associate research director. In 1984, Franklin took a brief hiatus from Burrell Communications to work as a research manager for the Johnson Publishing Company. She was hired by Leo Burnett Advertising in 1993 and worked on various Philip Morris brands as vice president and planning director for Marlboro USA until 2001. At Leo Burnett, Franklin was instrumental in launching several corporate trend initiatives, including LeoShe, Foresight Matters and 20Twenty Vision, focused on the female consumer and twenty-something audience. She also appeared on Oprah, where she discussed LeoShe's research on beauty myths.

In 2002, Franklin was named senior vice president, director of consumer context planning for Starcom USA, a Starcom MediaVest Group (SMG) company. She was appointed as executive vice president, director of cultural identities of Starcom MediaVest Group in 2006, and was later promoted to executive vice president, head of SMG Americas Experience Strategy in 2011. During her time at SMG, Franklin pioneered Cultural Communication Anthropology and worked on Beyond Demographics, a research study exploring the vital role of culture and identity in reaching consumers.

Franklin has received numerous honors for her work. She was named an AdAge “Women to Watch” and received the “Changing the Game” honor from Advertising Women of New York (AWNY). Franklin was honored with the prestigious “Legend Award” at the 2011 AdColor Ceremony, and was identified as one of the Top Women Executives in Advertising & Marketing by Black Enterprise in both 2012 and 2013. In addition, she has published several multicultural and subculture targeting pieces, and is sought out as a speaker and panelist on all topics related to the evolving consumer landscape.

Franklin has chaired The HistoryMakers National Advisory Board's Advertising/Marketing Committee and sat on the global advisory committee of the World Future Society. She has also served as a board member of the Family Institute at Northwestern University and the Chicago Urban League.

Esther Franklin was interviewed by The HistoryMakers on October 21, 2014.