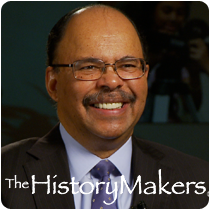 See how Erroll Davis, Jr. is related to other HistoryMakers
Donate Now

Education administrator Erroll Brown Davis, Jr. was born on August 5, 1944 and grew up in a working-class neighborhood in Pittsburgh, Pennsylvania. While Davis had a close relationship with his parents, Erroll, Sr. and Eleanor, his strongest influence as a child was his grandfather, John Boykin, a Georgia farmer who had migrated to Pittsburgh and worked as a chauffeur.
Davis graduated from high school at age sixteen, and then worked his way through Carnegie-Mellon University, becoming, along with his sister Diana who graduated the same year, the first members of his family to graduate from college. Davis received his B.S. degree in electrical engineering from Carnegie-Mellon University in 1965 at the age of twenty. He moved to Chicago for graduate school, receiving his M.B.A. degree in finance from the University of Chicago's Booth School of Business in 1967.

Following his graduation from Chicago, Davis worked briefly at ARCO, an international oil company, and then spent two years as an U.S. Army officer during the Vietnam War. In 1969, Davis joined the Ford Motor Company as a systems analyst. He later spent five years working in corporate finance at Xerox Corporation. Davis worked for Ford Motor Company until 1973, when he left for a position in Stamford, CT with Xerox Corporation, with whom he was affiliated until 1978. At Xerox, his focus was on strategic financial planning. Prior to the creation of Alliant Energy, Davis worked at Wisconsin Power and Light Company (WPL). From 1978 to 1990, Davis received several promotions through the senior management ranks at WPL, starting as vice president of finance and ending as CEO and President.

Davis’ higher education experience includes serving as a member of the University of the Wisconsin System Board of Regents from 1987 to 1994, and as a former chairman of the board of trustees of Carnegie Mellon University, where he is a life member. From 2006 to 2011, Davis served as chancellor of the University System of Georgia. He was appointed superintendent of Atlanta Public Schools in July of 2011. He is a member of the board of directors of General Motors and Union Pacific Corp., and serves on the Electric Power Research Institute (EPRI) board and on the advisory board of the Institute of Nuclear Power Operations (INPO) along with numerous professional associations and civic organizations. He is a former member of the U.S. Olympic Committee Board (2004-2008) and the University of Chicago Board of Trustees.

Davis is the recipient of numerous honors and awards, including recognition as one of the Atlanta Business Chronicle’s “100 Most Influential Atlantans,” one of the “75 Most Powerful Blacks in Corporate America” by Black Enterprise Magazine. Davis also was named one of the “50 Most Powerful Black Executives in America” by Fortune Magazine in 2002 and received the Distinguished Alumnus Award from the University of Chicago’s Graduate School of Business in 1993. In addition, Davis was honored by the magazine U.S. Black Engineer as the “Black Engineer of the Year” in 1988.

Davis and his wife, Elaine, live and in work in Atlanta, Georgia.

Erroll B. Davis was interviewed by The HistoryMakers on December 17, 2012.

See how Erroll Davis, Jr. is related to other HistoryMakers
Donate Now
Click Here To Explore The Archive Today!