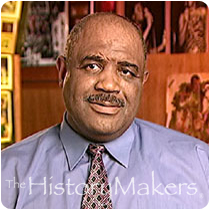 Favorite Color:
Dark Colors
Favorite Food:
Succotash
Favorite Time of Year:
Summer
Favorite Vacation Spot:
Las Vegas, Nevada
Favorite Quote:
This Guy Told Me That You Told Him Something I Told You Not To Tell Him.

Favorite Color:
Dark Colors
Favorite Food:
Succotash
Favorite Time of Year:
Summer
Favorite Vacation Spot:
Las Vegas, Nevada
Favorite Quote:
This Guy Told Me That You Told Him Something I Told You Not To Tell Him.

See how Ernie Terrell is related to other HistoryMakers

Heavyweight boxer and entertainer Ernest Terrell was born on April 4, 1939 in Belzoni, Mississippi. This tall and lanky athlete retired from the profession after 15 years of fighting with a record of 46 wins - 21 of which were knockouts - and only nine losses.

Terrell began boxing professionally in 1957 and simultaneously launched a popular singing group in Chicago with his sister, Jean Terrell, who later replaced Diana Ross with the Supremes. During his first year of boxing, he won all five of his fights, knocking out three of his opponents. He continued to excel, winning fight after fight over the next several years. Terrell also continued to perform with his musical group, Ernie Terrell and the Heavyweights.

After the World Boxing Association stripped Muhammad Ali of his title as heavyweight champion in 1965, Terrell finally got a chance for the label. He defeated Eddie Machen for the vacant title and retained it until February 6, 1967. That day, he fought in his most famous match against Muhammad Ali in Houston, Texas and lost after 15 grueling rounds. Ali, who had changed his name from Cassius Clay after converting to Islam, took offense to Terrell using his "slave name" and repeatedly shouted, "What's my name?" throughout the match. Terrell lost his two remaining fights that year and announced his retirement in December. However, he returned to the ring two years later, beating Sonny Moore on December 15 in 10 rounds. Terrell continued to win his matches, and on June 23, 1973, he earned another shot at becoming a heavyweight champion. However, Chuck Wepner defeated him in 12 rounds in an extremely controversial decision. Terrell boxed in his last fight on September 23 of that year.

After retiring permanently from boxing, Terrell became a music producer in Chicago. Terrell also had a brief stint in politics when he lost the 1987 election for alderman of Chicago's 34th ward. In October of 2004, he was inducted into the Boxing Hall of Fame.

Ernie Terrell was interviewed by The HistoryMakers on June 25, 2002.

See how Ernie Terrell is related to other HistoryMakers
Click Here To Explore The Archive Today!