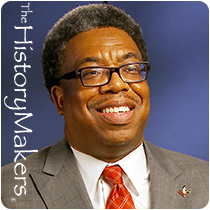 See how Ernie Suggs is related to other HistoryMakers
Donate Now

Journalist Ernie Suggs was born in 1967 in Brooklyn, New York. He entered into college at North Carolina Central University in 1985, where he was editor and chief and sports editor for the college’s award winning newspaper, The Campus Echo , and a member of the Alpha Phi Alpha fraternity. He graduated in 1990, with his B.A. degree in English Literature.

In 1990, Suggs was awarded an internship by the National Association of Black Journalists (NABJ) to work for Gannett Newspapers based in White Plains, New York. He returned to Durham, North Carolina in 1992, as a writer for The Herald-Sun . In 1996, Suggs was awarded a fellowship from the Education Writers Association, which culminated in his seventeen piece series Fighting to Survive: Historically Black Colleges and Universities Face the 21st Century . He went on to become a reporter at the Atlanta Journal-Constitution in 1997, where he covered politics, civil rights and race. In 2001, Suggs authored the Aetna African American History Calendar, which was focused on Historically Black Colleges and Universities (HBCUs).

Suggs’ series on HBCUs was the most in-depth newspaper examination of the topic ever undertaken, and was recognized for many awards: Journalist of the Year from the American Association of University Professors; First Place, Salute to Excellence Journalism Award for Investigative Reporting from the National Association of Black Journalists; Journalist of the Year from the North Carolina Black Publishers Association; Journalist of the Year from the North Carolina Press Association; and was nominated for a Pulitzer Prize. In 2002, he was named director of Region IV of the NABJ, and became vice-president of the organization in 2005. Suggs was chosen for the prestigious Nieman Fellowship at Harvard University in 2008, and in 2009, he joined the Nieman Foundation’s board. In 2010, he was the keynote speaker at 61st Annual Honors Convocation at North Carolina Central University; and he was given the Pioneer Black Journalist Award by NABJ in 2013.

Ernie Suggs was interviewed by The History Makers on February 18, 2014.

See how Ernie Suggs is related to other HistoryMakers
Donate Now
Click Here To Explore The Archive Today!