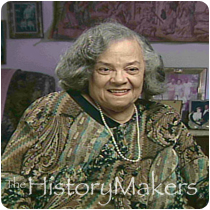 See how Ernie Mae Miller is related to other HistoryMakers

Ernest Mae Miller was born on February 7, 1927 to Lizzie Anderson Crafton and Otto Henry Crafton in Austin, Texas. Miller is the granddaughter of L.C. Anderson who was born into slavery, attended Fisk University, and became the third President of Prairie View Normal and Industrial College, the forerunner of Prairie View A & M University, succeeding his brother E.H. Anderson. Her grandfather would later become the principal of his namesake school, L.C. Anderson High School in Austin, Texas from 1886 to 1920. Miller graduated from this high school in 1944 at age fourteen.

Miller began playing the piano by ear after listening to her grandmother’s records on the family victrola. She was discovered to be musically gifted by the time she was five years old. After graduating from high school, Miller attended Prairie View A & M University where she was invited to play the baritone saxophone with the Prairie View Co-Ed Jazz Band.

The Prairie View Co-Eds were one of several African American all-girl bands that were popular with African American audiences in the mid-1940s. Miller traveled with the sixteen-piece band that performed for servicemen at army camps and forts all over the United States. The Prairie View Co-Eds performed in Tuskegee, Alabama on the same show with Bob Hope, Vaughn Monroe, and Anita O’Day in New York City and at the Plantation Club in St. Louis with Billie Holliday. Miller began her solo career as a jazz pianist and vocalist. She has played for most of the prominent hotels, events and exclusive parties in the Austin community. Miller was the featured performer for fifteen years at the Old New Orleans Club in Austin.

Though the Prairie View Co-Eds were never recorded and omitted from jazz and swing history, Miller has recorded two albums both titled Ernie Mae at the Old New Orleans Club and her career spanned over forty years. Ernest Mae Miller died on December 9, 2010 after battling a long illness. She was 83 years old.

Ernie Mae Miller was interviewed by The HistoryMakers on February 7, 2007.

See how Ernie Mae Miller is related to other HistoryMakers
Click Here To Explore The Archive Today!