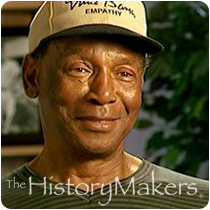 "One chance is all you need."

Baseball player Ernie Banks was born in Dallas, Texas, on January 31, 1931. As legend has it, his father had to bribe young Ernie with nickels and dimes in order to get his son to play catch.

An all-around athlete, Banks was a high school star in football, basketball and track. At age seventeen, he signed to play baseball with a Negro barnstorming team. Manager Cool Papa Bell recognized Banks’ talent and signed him to a contract with the Kansas City Monarchs of the Negro Baseball League.

In 1953, Banks was recruited directly from the Negro League into the majors with the Chicago Cubs. He hit his first home run on September 20, 1953, beginning a long career as one of the Cubs’ most beloved players. From 1955 to 1960, Ernie Banks hit more homers than anyone in the majors, including Mickey Mantle, Willie Mays and Hank Aaron, and he finished his career with five seasons of forty or more home runs. In 1959 he became the first player in National League history to win consecutive Most Valuable Player trophies, a year removed from setting an NL record for homers by a shortstop with forty-seven.

After retiring from the major leagues as a career Cub in 1971, Banks became the first Cub to have his uniform number retired. In 1977, Banks was elected into the Baseball Hall of Fame in Cooperstown. Cubs fans will always remember him as the ballplayer who said, "What a great day for baseball! Let's play two!" On March 31, 2008, Banks was honored with a permanent statue of his likeness at Wrigley Field.