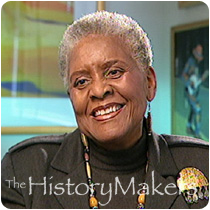 See how Ernestine Brown is related to other HistoryMakers

After graduating from Youngstown, Brown worked as a full-time business education teacher in the Cleveland Public Schools from 1960 until 1966, and then as a part-time instructor in business classes at Cuyahoga Community College until 1976. Since 1980, she has been the director and co-owner, with her husband water colorist Malcolm Brown, of the Malcolm Brown Gallery in Shaker Heights, Ohio. Under Brown’s directorship, the gallery has gained national and international recognition for increasing awareness and appreciation of the visual arts by exposing new and seasoned audiences to a broader spectrum of art and artists. Among the renowned African American artists whose works have been showcased in the Malcolm Brown Gallery are Elizabeth Catlett, Romare Bearden, and Selma Burke. Articles about the gallery’s exhibits have appeared in USA Today, Black Enterprise, and Essence Magazine among others.

In addition to serving a diverse audience of private collectors, Brown has worked to enhance and develop the art collections of public institutions and private corporations, including the Cleveland Museum of Art and the Coca-Cola Corporation. Brown is also a much sought-after speaker, addressing such topics as “Collecting Art: The African American Artist” and “the Role of the Gallery to Artists and Art Audiences.”

Brown is active in numerous professional and civic organizations, including the Advisory Outreach Council of the Cleveland Museum of Art, the Coalition of 100 Black Women, the NAACP and Delta Sigma Theta Sorority. She is also the recipient of many awards and honors, including the “Salute to Excellence in Art” award from the National Council of Negro Women and the Cleveland Arts Prize “Special Citation for Distinguished Service to the Arts.”

See how Ernestine Brown is related to other HistoryMakers
Click Here To Explore The Archive Today!